During October - December 2018, I conducted an applied ethnographic study with a team of 4 on the Marietta campus of Kennesaw State University.  The field our team chose was the campus ministry BCM: the Baptist Collegiate Ministry. Our area of inquiry was the meaning of community. We posed a design research question:
After we utilized various research methods and gleaned meaning from our data, my team members and I created a report to explain our discoveries. The full report can be read here, and this page is an overview of our process and findings.
SUMMARY
Through contextual inquiry, we attempted to learn about the social climate of the BCM and what it meant for students’ perceptions of community.
​
From our research question, we had several core concepts we wanted to learn about:
We came up with questions to ask members of the community; these questions were open-ended to encourage our participants to speak from their hearts and minds and simply converse with us.

FINDINGS
Our study led us to believe that for many of these students, community means...
The BCM provides opportunity for growth and a space for transparency. It provides its students with skills and confidence to navigate life with – through INTERACTIONS. Our team decided to focus on those interactions through observations, which occurred with team members jotting down field notes, and face-to-face interview sessions, which were documented by handwritten notes and audio recording. Utilizing both observations and interviews in this study allowed us to learn about the BCM's community at large and small scales. We carried out 2 observation sessions and 2 interviews.
TEAM & ROLES
During different stages of this project, members shared and rotated roles and responsibilities.
More specifically, I recorded field notes at our second observation and took lead on our second interview. I had visited the BCM before a few semesters previously, and felt comfortable sitting and chatting with our second participant during her interview. I enjoy talking to different people in these contexts and hearing their perspectives on life.

After our observations and interviews occurred, I was one of the team who delved into our field notes and discussed what we had learned in order to condense our data. After our team member Courtney wrote the bulk of our report, I went through and edited for grammar and clarity. I also created the final presentation that was to be shown to our Ethnography class.
METHOD - APPLIED ETHNOGRAPHY
In this project, we used a form of ethnography called applied ethnography. Applied ethnography works on a small scale to understand meaning in a given context. Individuals conducting applied ethnography insert themselves into a social group or physical context, like an office, a home, or a campus ministry, and attempt to derive meaning from observing events and people and interviewing specific individuals. It's also referred to as contextual inquiry: asking questions in a certain context in order to learn about what happens there. This is an effective method because much is conveyed through people's actions and behavior as well as their words.

We had a relatively small amount of time to work on this project - only about two months. Observations, interviews, and data sifting had to be rather rushed; however, we were able to see a lot of patterns and telling things in our data, and at the end of the project, we felt that we had deducted good concepts to answer our research question.

​To me, this process of applied ethnography revealed to me that I enjoy research as well as engaging with people to discover what their thoughts about a given meaning are. It's more rewarding to me sometimes to work hard on research, writing, and presenting to convey findings than to create a design simply for design's sake. This project meant getting to know the members of the Baptist Collegiate Ministry a little more and receiving a unique insight into their world. I feel as though I understand their community now.

This project can be broken into 3 main parts:
OBSERVATIONS
To start off this project, we decided when and where observations would be best to conduct. Our team knew that we wanted to observe the community as a whole first  before focusing in on individual people. The BCM holds different weekly events that vary by day; worship sessions, Bible studies, lunches. We ended up choosing a Tuesday night worship session and a Thursday night Bible study for our observation sessions.
Jocelyn and Niah attended the Thursday evening Bible study to observe. The BCM hosts Bible studies for both men and women; our team members went to the men's. This event offered insight into how the BCM's community operated on a smaller scale and opportunity to focus on conversations and leadership between individuals. The Bible study is a place for the young men to talk with each other about life and spiritual topics, grow with each other, and experience discipleship. Our first interview participant, Chase, was the leader of this study.

Niah, Courtney and I attended one of the Tuesday night worship sessions. These are events where a much larger group of students meets to commune, worship, and be led together. Tuesday's session allowed us to see how the members of the community acted when with the majority of the group; if most students knew each other; if anyone seemed isolated or left out; how discipleship was implemented on a larger scale. A friendly atmosphere surrounded the whole night; several students went up to speak in front of the room at different times through the night, whether to give announcement or share personal testimonies, and it seemed as if they were amiable with many of the other students. Several students came and went due to class schedules throughout the session, not seeming to be judged for this.
This event took place in the main worship hall; the men's Bible study had also met there, but that was a more intimate study since there were fewer people.

We took note of everything we saw and heard at these events. I found it challenging at first to really look and take in everything at the session I attended, especially since that was a space I had been in before, not as a researcher. I eventually settled in somewhat to being more observant of what was around me. At the second observation, we found the main leader of the BCM, Dave, and explained to him what we were doing with our project and checked that he was okay with our presence there. He was more than welcoming, saying that the whole building was ours to roam, as well as very excited about our project, going so far as to say he'd like to read our report when it was finished. 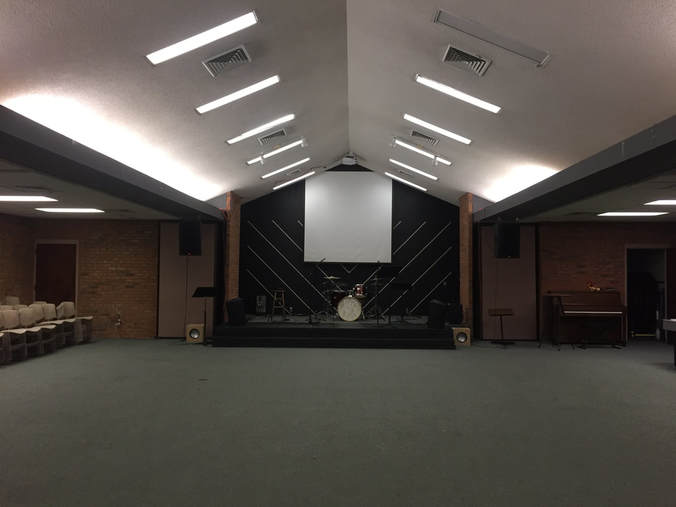 MAIN WORSHIP HALL
INTERVIEWS
At these sessions we observed, several individuals drew our attention as being leaders among the students, whether by title or just attitude. One of these was Chase, the leader of the men's Bible study group. Another was Megan, who we noticed during the Tuesday worship session. Megan had seemed to be in some position of leadership by her behavior at the worship session, and she had spoken to the students about raising money for mission trips. Niah reached out to Chase after the Bible study and I approached Megan after the Tuesday session to ask them if they would be interested in interviewing with us for our project. They both complied cheerily, saying they'd be glad to help.

To prepare for our interviews, Niah wrote a list of open-ended questions to ask the participants. We wanted our questions to be in this style so the interviewees would be encouraged to speak answers more than simply "yes" or "no", and to ensure that the questions wouldn't leave their answers biased.

Niah agreed to moderate Chase's interview, with myself and Jocelyn taking notes throughout. Upon meeting with Chase, he was very amiable and agreeable to being interviewed, though he had a moment at the beginning of the conversation where he was slightly put off by having his words documented by me and Jocelyn. After a while he seemed at ease, and keen to talk about what he valued and saw in the community at BCM. Chase spoke a lot on how transparency, fitting in, and peer encouragement are important in his eyes in that community. "What I value most here is transparency. What I mean is that, it's not that people see right through you....the stuff that might be hiding who you are is transparent, the stuff that might be wrong is right up there....we can be real with each other." The freedom to be one's self and to feel that you fit in is something he greatly appreciates about the BCM and has experienced in his past few years there.

I set up Megan's interview, and had Courtney and Niah to take notes. We also recorded the audio of Megan's conversation with us. Upon talking with her for a few minutes, we learned that she had actually graduated from KSU in 2016, and had come back to work at the BCM as a part-time campus minister. It was immediately evident that Megan has a huge heart for the students, and especially expressed how she has a passion for reaching out to international students on campus. One year, after learning that several international students would be spending their holiday break on campus alone due to no friends, her "heart just broke for them," and she and other leaders in the BCM made a point to start engaging more with international students. Megan touched on the importance of investing in students as well; the BCM wants to be known as hospitable and to ensure that every student that walks in the door has a friend and is known. "Being known is a big value."

ANALYSIS
After concluding our interviews, we started to look at the data in our jottings and notes to begin sorting our findings into categories and patterns. We looked at the data we had collected on a macro and micro level. Courtney is great at looking at large amounts of data, and took the lead on organizing the data and gleaning answers from them.

We found that two core concepts in the meaning of community to the students of BCM are:


Students desire growth and to be around others who will encourage that in them; the growth is on an individual level, but is informed by interactions within a community. This segues into the second concept: since students want that encouragement to grow, they want conversation and connection that isn't shallow, but means something and is backed by intent. Investment from others helps these students thrive and keep growing.

We also derived 3 key points that fit within those concepts.

Our study led us to believe that to students at the Kennesaw State BCM, community means interactions with intent, desire and freedom to be open about themselves, and feeling that they are somewhere they are needed and belong. These students value friendship, safety, honesty, and authenticity.